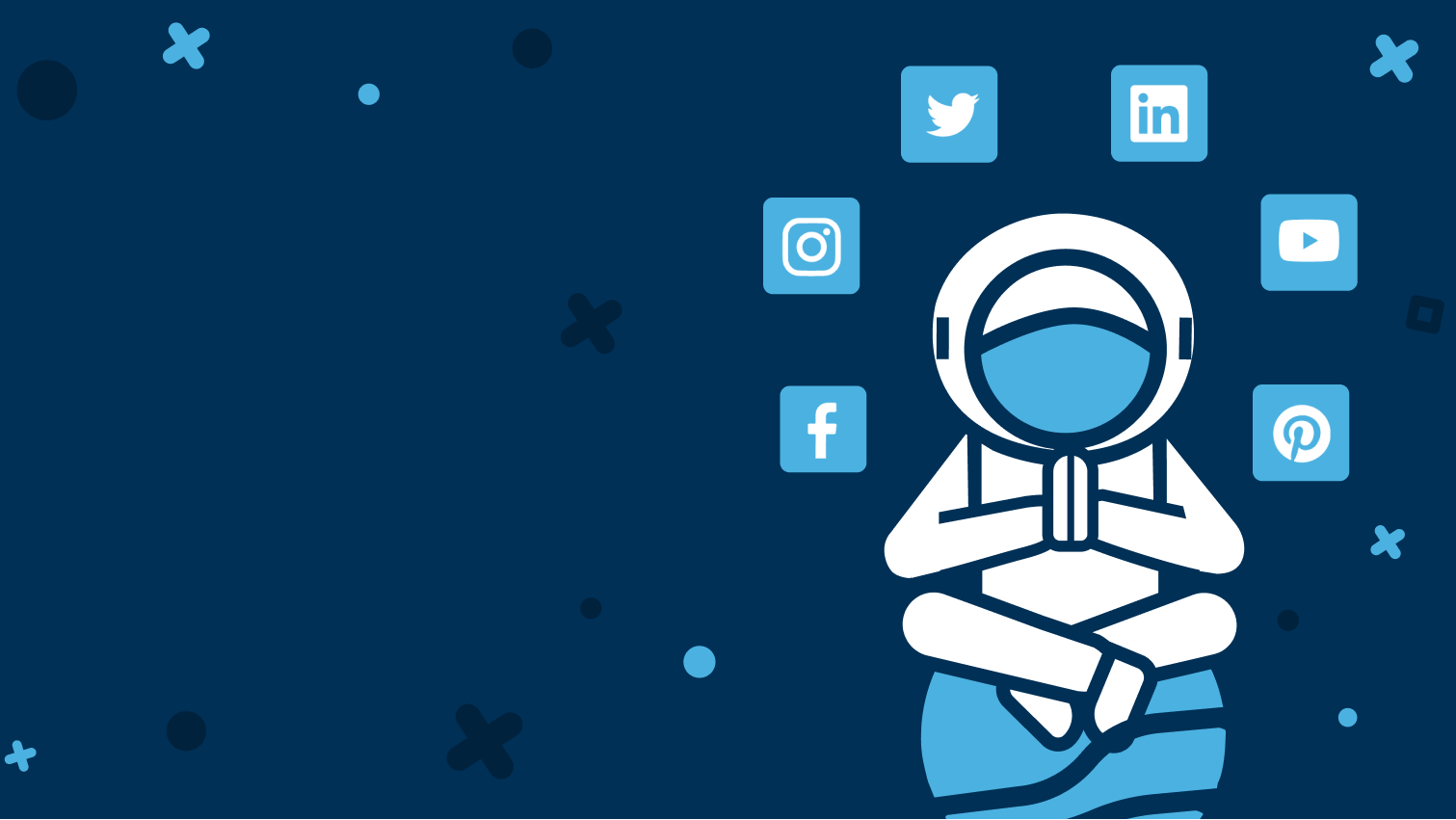 Social Media Marketing
By Taylor Torres on May 31, 2019

Want to know how to get into your customer’s head? Do you want to literally possess your audience like a ghost in order to drive sales? We can’t help you with that. But we can tell you what your audience looks like and how they act on social media, which is kind of the same.

On our blog, we talk a lot about how great social media is for marketing. You can find audiences, build a loyal customer base, and even use social media as a platform for customer service. But how well do you really know your audience? Sure, you know they’re on Facebook and Instagram, but what are the demographics for those platforms?

It varies by platform, but there are some pretty interesting statistics that might help you develop your next social media marketing plan. No ectoplasm necessary.

Facebook is a pretty ubiquitous player on the social media field. With almost 2.4 billion users and wide-spread recognition online, almost everyone has heard of it. While the audience is starting to lean towards older users in the 35+ range, there’s still a respectable spread of younger people with a diverse set of incomes.

In spite of the variety, companies looking to capitalize on the spending power behind Facebook’s audience should center their efforts around age and business presence. For age, it’s fairly straightforward. Older users are typically the ones spending more money, at least on Facebook, so marketing strategies should account for the skew towards older audiences.

The other major factor is how easy it is to find and recognize a business through Facebook. Just like its users, Facebook is one of the older and more established platforms, which means audiences expect to find what they’re looking for. If someone goes looking for your company and there’s no Facebook page, they might suspect the brand is out of touch or more difficult to reach than a competitor with a fully fleshed out online presence.

In a lot of ways, Instagram is overtaking Facebook as the major platform for younger users. The majority of the audience on Instagram is between 13 and 24, and rapidly falls off in the 50+ range. However, there’s still a noticeably high amount of income for the age range, with more than 30% of users falling into the $30k-74k annual income bracket.

Basically that boils down to a lot of young people with a lot of money to spend. Marketing on Instagram is particularly effective because of this, so long as the campaigns are working to target this audience. One key factor is to build a campaign around that potential buying power, just because the users are young doesn’t mean they’re cheap, so brands could stand to benefit from investing a bit of their marketing efforts for all kinds of products into Instagram.

Given their similarities, Instagram and Snapchat might come up together, but over time Instagram has steadily replaced Snapchat as the popular medium. Particularly when it comes to marketing and social posts, Insta stories have taken over, pushing Snapchat out of the picture.

Twitter is a bit odd in the marketing and ad world. Like, ads exist and people market through Twitter, but all the posts and trends move so quickly that there’s not a solid foundation to build a whole campaign on. In a lot of ways, this represents the typical Twitter audience, which is mostly Millennials and people logging on for a quick Tweet or string of comments and memes.

For those companies that do find success on Twitter, it usually boils down to building a solid brand voice. Some companies even develop a sort of persona, which they use to interact with their Twitter audience on a more real time basis than other social platforms. The key factor is really time. Reacting to events as they happen, responding to tweets and taking part in comment threads, these are the best way to maximize the value of Twitter as a marketing tool.

That said, it’s less about ads and tangible returns. Twitter is a great place to build reputation and recognition, but it’s not a very good place to post a static, traditional advertisement because the threads move too fast for people to see. There’s also the character limit and general audience usage of Twitter, which has made it more of that “in the moment” style of social media than something where posts linger for a few hours at a time.

Similar to Instagram, Pinterest has a higher concentration of young, high-income users comprising its audience. With a majority of its users coming from the 18-49 age bracket, and income skewing towards the higher end, Pinterest is a unique platform based on how the whole site is structured.

A majority of users go on Pinterest to organize and plan themes, collections, or other things they enjoy. Because a large aspect of Pinterest is the image and product focus, users also tend to plan out purchases using their boards and collections. With 39% of Pinterest users in the $75k+ income bracket, it’s an incredible opportunity to market to people that are already looking to spend and plan purchases ahead of time.

While not quite as huge as Instagram or Facebook, there’s still an impressive 250 million monthly active users, meaning that there is absolutely a market on Pinterest.

While LinkedIn isn’t the first thought for marketing strategies, it does offer a unique element that isn’t quite as heavily influential on other platforms. For LinkedIn, the major factor is education. When we look at the education breakdown for users on LinkedIn, 50% of users have a college education or higher degree. The age range is about where you’d expect, with the greatest part of the audience hitting somewhere in the 23-45 area.

With the whole platform designed around networking professionals, any campaigns focusing on LinkedIn should take into account the type of people most likely to on the site. Sounds like a bit of obvious advice, but if the people you’re marketing to tend to work in the more academically rigorous fields like medicine, law, or engineering, you’ll have to adapt your strategies to account for that.

On top of that, most people on LinkedIn are looking to network and build connections, they might not be overly receptive to a more traditional style of advertisement. Instead, it might be best to pursue a style of outreach that builds relationships or focuses on the job hunt, two examples based on what most LinkedIn users are on the platform for in the first place.

Finally we’ve got YouTube, which is a bit of a catch-all. With arguably the most diverse and evenly spread audience, YouTube reaches people in basically every demographic. Including age, income, education, and overall number of users, coming in just under 2 billion, the platform has incredible reach.

In fact, the diversity of the audience is easily the most compelling case for marketing through YouTube. For most companies or brands, if you’re producing video content for your own site or other marketing efforts, you should probably also be on YouTube. The method of delivery, the frequency with which people share, and the near universal accessibility of YouTube make it a standout crosspoint of different audiences.

There’s also a degree of diversity in how you can deliver your marketing campaigns. From sponsoring YouTube personalities to direct advertisements on videos, companies have a lot of opportunity to present their brand to the world. A number of large companies even have their own dedicated YouTube channel where they release promotional content, news, and other updates for people that follow the brand.

Want insight on how to get more followers on social media?

No matter what channel you decide to work with, always keep your audience in mind. It’s pretty simple stuff, but keeping track of statistics and user demographics can help you design or redesign your marketing efforts to be way more effective.

Want to see how your social platform of choice stacks up when it comes to consumer demographics? Take a look at the full infographic we put together to do just that!

Subscribe
Related Posts
How Social Media Remodels And Impacts Our Choices The Ultimate Guide to Instagram Why Pinterest Is A Marketing Channel Your Business Shouldn’t Forget Get Your Business Noticed: Instagram Edition
Featured Posts
Why We Recommend Custom Websites Over A CMS Significance of SEO – During Pandemics, Recessions, and Downturns Why is SEO Misunderstood? What is keyword density, and why does it matter? How To Create Content that Ranks in 2020 How To Get Started With Technical SEO Guide to a Better Marketing Strategy: Part 1 Considering a Website Migration? Don’t Make These Mistakes Read the Mentions: Is Social Media the New Customer Service? Common Mistakes Businesses Make When Running a Business Blog